My street is a pretty perfect storm of parking chaos, although it’s perhaps not as bad a situation as the handful of places in this city which do actually have controlled parking zones. The council policy here seems simple enough – if there’s an “other” that causes the chaos, such as a hospital, station or university campus, then they will implement restrictions. If there is no other, then you have to jump through hoops to get a controlled parking zones (CPZ). Outside the city centre and a few streets right next to it, the city is basically free for all to park as they please, year round. Even where we have double yellow lines, they are rarely enforced. 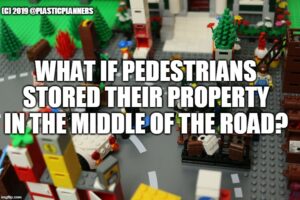 Right here on this street, we have plenty of reasons why people who don’t live here might want to park. We have pubs and a large leisure facility nearby (closed for now but it’s usually busy at the weekends), and we’re also close enough to the city centre for commuters to park here and walk in.

So what is anyone doing about it? It’s basically a chestnut which comes round every few residents’ group meetings. Nobody wants a CPZ if it means they have to pay for a permit or if it means visitors will need to use up a token, yet since our pubs are actually genuinely quite “local”, they also don’t want pub visitors to be excluded.

There’s no simple solution in this location, but there is a very basic economic principle – when demand regularly exceeds supply, in any “normal” market, the response of the providers would be to increase prices, until an equilibrium is reached. We know from the work of Donald Shroup in San Francisco that this point is typically when the peak time usage is around 85% of available spaces. Any more than this means that drivers will cause a lot more congestion by circling around and looking for spaces.

Any increase from zero is always infinite

Introducing parking restrictions doesn’t mean that everyone has to pay, all of the time. Nor does it mean that the timing of restrictions has to be based around “office” hours. I was even pleasantly surprised yesterday to find a string of cars parked in a popular cycle lane which all add tickets on them, even though this was well beyond the city centre and this was a 7pm. Patrolling can be done if there is a fair system in place, with community support. Likewise, it’s no surprise that papers are full of complaints about councils wanting to double or treble permit costs, when here, the going rate for the “non othered” parking zones is a mere £20 for 3 years, which barely even covers the administration costs.

I’d get rid of all the large commercial vehicles too – we sometimes even have a giant road sweeper truck parked on the street here, even though this is supposed to be a conservation area. Pub visitors can be allowed to stay for a period of time without paying. It’s not for me to say how long that should be, and nobody should be in a situation where they have a few drinks and then need to choose between driving home or paying a parking fine. Parking spaces can always have a free period followed by feeding the meter.

Why can’t I park outside my house?

I haven’t driven for several years, but the same car has been outside my house for a couple of weeks now. Even before lockdown, some cars wouldn’t move for a month or so. Remember that the average car sits idle for 96% of the time. I’d love to park some of my bricks outside my house. They would take up the space of a small car, and this would free up a lot of downstairs space. Technically, I could buy a cheap van and do just that. But why should the bricks be encased in a metal box just to be legally stored there?