Is it possible to even suggest that we might have a car addiction? That we could do a few things to temper this addiction? Or to suggest anything without being told immediately in reply that you are trying to “ban cars”?

No city in the world of any size has banned cars to date, nor are there any cities with such a plan to do so. 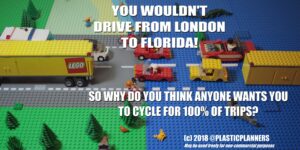 The historic centre of Venice is full of narrow alleys and canal bridges. These naturally make it impossible to drive cars across them. This part of Venice has never allowed cars in the first place, therefore they haven’t been banned.

There are also giant car storage bins (ie multi storey car parks) on the edge of this historic zone. These are available for both visitors who bring their own cars, and for residents who pay for long term storage there. You can also very easily hire a car on the edge of Venice if you live there.  You can also hire a car here as a tourist, or at the airport.

The rest of the Venice metropolitan area allows cars in much the same way as any other city in northern Italy.

What about Alpine Resorts?

There are a very small number of alpine villages where it’s not possible to drive. In some cases, such as Murren in the Bernese Oberland, these locations are high above the valley floor. Driving isn’t essentially banned in these places. There simply aren’t any roads leading to them in the first place.

At the base of the Matterhorn is the resort of Zermatt. This popular skiing destination does have conventional roads leading into it. However, driving is not permitted in the village itself, but small electric carts are permitted. A giant car park is still available on the edge of Zermatt. Regular train shuttles provide a link into the resort.

Zermatt is possibly as close as any major tourist location gets to a “ban” on private car usage. It’s still perfectly possible to drive to the edge, and thousands of people do so each year.

Oslo is preventing on street parking of petrol and diesel cars within a very small zone in the city centre. Oslo already has massive subsidies for electric cars, and this has resulted in significant uptake.

Oslo is not banning cars, nor is there any intention to do so.

Amsterdam might be considered as one of the world’s great cycling cities, but most of Amsterdam also still has very extensive car ownership and usage.

Dutch car ownership is on a par with the UK. Within the very historic core of Amsterdam, street parking has been removed, This has often been replaced at vast public expense with underground storage areas. Again, underground car storage is popular in many other European cities. This is often charged at rates which are well below the cost of building it.

Amsterdam is not banning cars.

Copenhagen has a policy of slowly reducing street parking by 1% each year.

Copenhagen is not banning cars.

No, most cyclists also drive cars.

Most people who lobby for better cycling provision would like to see some measures brought in to manage on street parking. This might well mean that councils charge a variable annual rate for parking. It might, at the very least, mean that parking permits are a reasonable multiple of the daily cost of visitor parking.

As it currently stands, even many London boroughs still charge next to nothing for car parking permits, whilst very few charge any more than £1 per day for even the most polluting types.

London is not banning cars.

Should we ban cars? 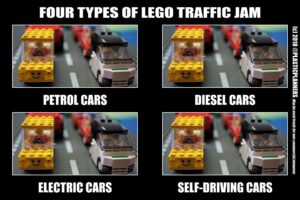 The word ban is a very strong one. Taken literally, this would mean a complete cessation of any ability to own, lease or hire a car for any purpose. No political party and no campaign organisation is close to even calling for this.

The car ownership model as we know it is not going to exist in a decade’s time. How many people still use film cameras (or fossil cameras if you prefer since the film was largely derived from oil) today? Why does it make any sense to transfer from mass ownership of petrol and diesel cars to mass ownership of electric cars, when this will merely transfer many of the problems caused by parking and congestion? Electric cars also need a lot more resources to make, so it’s going to make more sense for many people to rent them by the hour, rather than buy them. As it is, the average car is unused 96% of the time.

What are people so fearful of such an inefficient and outdated concept being “banned” when it is going to become extinct anyway?