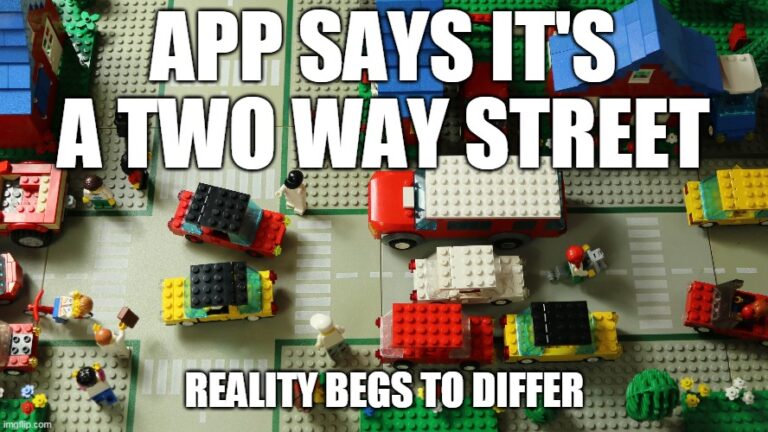 Every neighbourhood has them – two way streets which are designated as such on the map, but which can only function in one direction at any one time. Why can’t they operate in both directions? Nearly always, this is because they are so full of parked cars that there is only one general travel lane, such that vehicles have to be driven right down the middle of the road. Ever heard how it’s cyclists who hog this “middle” of the road, yet on twone way streets, cyclists can often flow freely as drivers in cars patiently wait for each other.

Why isn’t there much more honking of horns on roads like this? Obviously, sometimes there is, but drivers don’t usually start bleeping at each other just because they are there. That kind of bullying is usually reserved for cyclists, and sometimes for pedestrians who dare to dash out and try to cross the twone way street.

In most such cases, the cars are parked perfectly legally – it’s just that the council has chosen to prioritise the storage of cars over the general movement of traffic. Yet the archetypal twone way streets aren’t just quiet side roads, but instead are usually through streets with reasonable traffic levels, even if they aren’t arterial roads. Oh, but arterial roads can get blocked like this too – especially when one driver double parks because they will be “back in 30 seconds”.

Some twone way streets even manage to sustain some level of bus service, despite these obvious delays. Then again, when the bus drivers do manage to fight their way through, they can still expect to be honked at, because as everyone knows, buses delay cars but other cars never do – parked or otherwise.