As we know, most car storage in the UK is free, and even in “controlled” parking zones, car owners usually just pay a peppercorn rent for the privilege, sometimes a fee that barely even covers the admin costs. If the pressure on the parking comes from an “external” source – such as a university, a hospital or a railway station, then there’s a good chance that the council will even give away that valuable permit for nothing. That’s what my council does, whereas most permits are just £20 for 3 years! 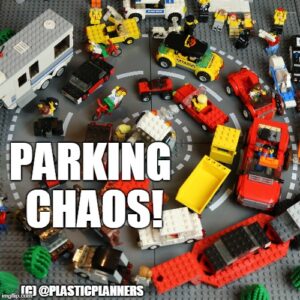 Yet there are many locations where different users want that space at different times of day – whether they are residents who may or may not commute (during so-called normal times), visitors to local shops, commuters to nearby workplaces themselves, or possibly evening social visitors – again, either to local residences, but possibly also to pubs and restaurants.

This blog post isn’t so much about how much councils should charge for on-street parking, because this itself is subject to both local politics, and restrictions about parking fees not being used to “raise revenue”.

So this is more of a hypothetical question – if councils, or indeed any private landowners, were in a position to set parking scales in order to actually balance supply and demand, how would the one hour visitor be charged, relative to someone who might be staying all day (a commuter perhaps), for the week (short term contract worker) or indeed for the whole year (resident).

What the law says at the moment

Section 122 (of RTRA 1984) imposes a general duty on local authorities exercising functions under RTRA 1984 to “secure the expeditious, convenient and safe movement of vehicular and other traffic (including pedestrians) and the provision of suitable and adequate parking on and off the highway…”.

The only way that things can change will be for this to be reviewed. Without councils even being able to consider making a “surplus” from parking charges (and not merely covering costs with a small margin on top), this act will have to change. As ever, this is about what could be done, not what can be done right now.

Here is a sample scale. I’m not saying it’s wrong or right, but hopefully it gives something to compare with. £1 per hour would be cheap in many town centre locations, and it would certainly be a bargain in much of London. Yet I’ve scaled this down to £1 per day for parking all year, but this still comes out of course at £365 – a figure which would be deemed positively outrageous in almost every single council area in the country, even though it’s 1/24th of the hourly rate.

Doesn’t this show us just how much political interference we already have with parking charges – even if the same would be claimed whenever councils want to increase charges, or have a higher charge for larger or more polluting vehicles?