This might be an obvious enough statement – in 1980, in the UK at least, there were no mobile phone related car crash deaths. The first networks were just being established at this time, but early phones also tended to weigh upwards of 2kg, making them difficult to carry, hence why we had “car phones” to begin with in the early 80s. 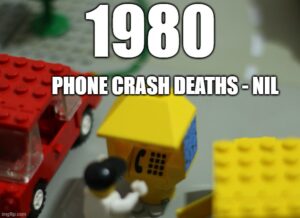 Clearly, the mobile phone brings immense benefits, and this post isn’t to even begin to suggest we should wind the clock back. But it must surely be a reasonable question to ask – if we are going to allow wide spread adoption of a new technology, shouldn’t legislation – and most crucially, enforcement, also keep up with these changes?

Official figures from both the UK and the USA show that around 2-3% of car crash deaths have mobile phone usage listed as a major cause. However, we also know that it’s heavily under-reported. In reality, these are just the cases where mobile phone use is proven.

In recent years, the idea of “Vision Zero” (as in zero road crash deaths) has started to become more commonplace, despite it first being proposed in Sweden over 20 years ago. Some might argue that in any society where citizens are driving billions of miles each year, there will always be mishaps, and that Vision Zero can only ever be an aim or a slogan. I’m not so sure. It’s extremely rare that I come across any kind of road crash report that didn’t feature some element of bad decision making on the part of one or more road users.

Every crash is the result of decisions, not just oversights. And there is no choice that is more obvious than the choice to make a phone call or to read a text message. The tragedy of mobile phone crash deaths is not so much the fact that they happen, but that every single one of them is preventable.