It’s amazing that certain politicians are still talking about “Sadiq Khan imposed” LTNs (low traffic neighbourhoods), when the idea has been around in some form since at least the 1930s.

The basic idea of the low traffic neighbourhood might have first surfaced with the cul-de-sacs which are so common in 1930s housing estates, but the basic principle is the same – side roads are for access, and traffic is retained on the through roads.

Except, hang on – don’t they actually go back further than that?

The basic concept behind LTNs

Perhaps you can argue this either way – LTNs exist because the aim is to create a network of “quiet” streets, and in order to do so, through traffic needs to be kept on the main roads. We’ve had hierarchies of streets as long as we’ve had streets: 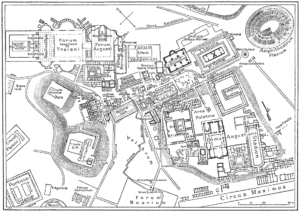 Except of course that Roman streets weren’t designed to selectively keep out any form of moving traffic, and nor were any other streets at any point up until the invention of the motor car in the late 19th cenutry. This doesn’t mean that filters didn’t exist – far from it!

Any form of city gate acted as a “traffic filter”. However, these filters existed to stop, or at least to question, anyone entering or leaving, regardless of whether or not they were travelling with any form of wheeled device. Therefore, ancient cities might not be considered to have filters designed in – but they certainly ended up acting as modal filters in modern times, because narrow streets made it difficult or impossible to drive cars within them.

What do LTN opponents actually want?

One of the problems with trying to debate with opponents of traffic filters / LTNs is that it’s difficult to find out exactly what it is they are campaigning for. So they don’t want traffic on the main roads, but they are also against parking restrictions and other measures which would make the main roads flow more smoothly? They don’t want side streets made safe, but they have no other suggestions about how this can be achieved without some kind of filter?

What they want, in design terms, does actually exist in a few places, yet contrary to what LTN opponents claim, it’s actually far more experimental and untestest than the LTNs themselves.

Let’s think this through! Those who are against LTNs don’t seem to be against people driving cars – far from it! They just don’t want traffic on main roads if it was previously to be found rat running – a problem they of course don’t think exists, because if rat running can’t be defined, there can be no rats. So what do they want?

The more technical term for an LTN is “filtered permeability”. Specifically, this means that the streets are open and permeable, but filters apply which stop motorised vehicles from running through the streets. This can be achieved by blocking access and egress at certain points (the filter), or simply by using a network of one way restrictions which makes it impossible to drive through the area.

It might be argued that ancient cities used unfiltered impermeability – in other words, the city gates simply stopped anyone from entering without performing certain checks on their elegibility, and then those who were deemed “acceptable” to city authorities were allowed to pass through. However, this might not be considered to be a filter in traffic terms if acceptability was based on having the right papers, or even paying a toll – since those with larger carts could still access all areas once past the gate.

The opposite of all of this would be unfiltered permeability. This basically means that all streets have the same level of access, and all permit movement of all vehicles in all directions. Essentially, isn’t this both equality in action, and also a very libertarian approach? What could possibly go wrong?

For starters, as with so many things proposed as “libertarian”, the unfiltered and totally permeable city really only exists on paper. Think this through – if all roads have equal status, then all must be built wide enough to cater for all possible traffic, and this also means that all junctions must be able to handle all traffic in all directions. Sooner or later, as the theoretical city gets larger and larger, the natural inclination is to start building highways, but this goes directly against the idea of all streets being equal.

There are also a small number of “new urbanist” type developments, such as Seaside in Florida, where there is an open grid which spans s few blocks, but which ultimately hasn’t been (and can’t be) tested on a grander scale.

Hence, once we get back to real geography, sooner or later the open grid meets the freeway onramp. This is why, even where the city has been laid out on a grid – as is so obviously the case in Manhattan, those grids have to disperse traffic from these freeways sooner or later. Even in London, which has very little by way of actual inner city motorways, the main through roads must feed in to those multi lane dual carriageways which then become the motorways that fan out beyond the M25 orbital motorway.

Even if the argument for “open” streets or “equal” streets was that there should be no motorways, then there will always be constraints due to the need to build bridges and tunnels to cross bodies of water or go under difficult terrain.

Hence, there will always be a hierarchy of streets, whether people want it or not.

If there is one thing that’s worse than the academic concept of “equal roads”, then it’s the reality of what happens when networks are only built with driving cars in mind. In these situations, the car is the only consideration, and every development must be considered in terms of how it plugs in to the vast machine of multi lane highways and freeways. Thankfully, although the UK is still very car dependent, we haven’t quite gone as fas as having developments which are so bad that they can only be driven to. In Orlando, for example, there are places where two neighbouring properties (or houses which back on to each other) can only actually be reached by way of a 7 mile drive – and this route can’t even be walked, even if you wanted to, because it involves using the freeway.

In this nightmare reality, houses are built in “crime stopping” cul-de-sacs, which are all arranged in broccoli flowers, which all feed back onto the freeway, and no connections are provided between the tips of these flowers and the other tips which they meet. Thus, at this end point – the exact point where people want to walk their dogs, socialise, or take a shorter route to the convenience store or school – the entire system is impermeable to all modes.

Yet at the junction – where the cars are all congregating aorund the stop light – at this point, everything is totally impermeable to walking, and cycling is also a non-starter.

Thankfully, anti-LTN campaigners in the UK aren’t arguing for filtered impermeability. But they are still arguing for something that only exists on paper, namely unfiltered permeability. The reality of what they argue for is that the status quo means retaining our car dependent nightmares. It means retaining the basic lack of safety which makes it so difficult for people to go about their ordinary business. Above all else, it also means doing nothing about the main roads, which need to be dealt with through other means which go beyond filtering – ie by removing parking and creating safe cycle lanes, together with safe junctions for all users.