If your council is anything like mine, then sometime around the early summer of 2019, they will have signed a “Climate Emergency” declaration, and then buried somewhere under a huge mount of (actual and non-recycled) paper work. 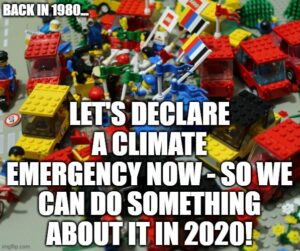 No doubt they will now be saying we’ve had a”real” emergency relating to the pandemic, but let’s not forget that the best part of a year passed between the emergency declaration bandwagon trundling through town and the start of the first lock down. To be clear – my council doesn’t appear to have had any pandemic preparations in place either, but who did.

So here’s a challenge – maybe even not just a UK one, but perhaps a global one. Can anyone get their local council, or even country, regional, state or national government to sign a climater emergency “redeclaration”?

I’m honestly not sure on the wording for this – obviously no council is going to admit to being patently useless so far. Maybe they can commit to “redoubling” their efforts. Doubling would be a start. Anything would be a start from a baseline of zero!