I’ve just seen a very good example of the Air Drumstick Driver (or just #drumstickdriver if you prefer – other sticks are available). 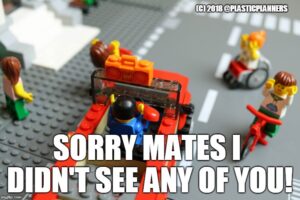 Thankfully, this particular kind of bad driving – where the driver basically has no hands on the steering wheel at all, is usually quite rare, but it’s extremely dangerous, nonetheless. Drumstick driver is quite different to the ubiquitous texting driver, and he’s also in many ways the exact opposite of Schrodinger’s Car (Driver) – the sort who will beep and harass as soon as he sees you.

So what’s so bad about drumstick driver?

Sadly, there’s little that anyone can do about the air drumstick driver. He is just as likely to apologise with a classic round of “sorry mate, I didn’t see you” as he is to get angry, because he has at least been partially pacified by his music. He’s also probably too busy with his air drums to have any time to send text messages, but he’s clearly driving without due care and attention. This is probably most visible if you happen to be stuck behind him in traffic.

You can also guarantee that he will still have a go at any pedestrian who walks in front of him at a zebra crossing if they aren’t wearing hiviz, or if they themselves are listening to headphones.